You’ve probably see your yorkie sleep in all kinds of bizarre positions.

On its side, curled up, on its back and a bunch of positions I can’t even begin to describe.

Personally, I love seeing some of the insane poses my pup gets himself into at times.

They make for great photos, too!

But today we’re going to focus on the most common yorkie sleeping positions, not the ones that resemble yoga masters.

We’re going to describe each position and take a look at what they say about your dog.

Because the psychology behind the various sleeping positions can be pretty interesting, if you ask me.

Let’s take a look at each of the most common sleeping positions in turn and see what they might indicate about your yorkie.

Sleeping On The Side

Experts say that when a Yorkie, or any dog, sleeps on its side, they feel safe and comfortable. This position exposes their vital organs, so they would not sleep like this unless they felt certain they are in no danger.

Yorkies who love sleeping in this position tend to be easy-going and relaxed. Of course, they may switch positions while sleeping. That is perfectly normal.

Another bonus in this position is that their limbs are free to move. You’ll see the most twitching and leg kicks when your dog sleeps on its side.

Paws Up In The Air

In the same way that curling up in a ball conserves heat, sleeping with their paws in the air helps their bellies cool off. Since the fur around the belly is thinner, and the paws have sweat glands, this position allows a hot yorkie to cool down a bit and beat the heat.

Also, this position is an indication that your dog feels comfortable. It is leaving its most sensitive areas exposed and vulnerable and this position makes it hard to get up quickly.

This position is common in most dog breeds. It is especially common during the summer months, when dogs do what they can to stay cool.

Curling up in a ball, nose to tail, is a very common sleeping position for yorkies. It is the most common position for many animals in the wild, because it helps protect their vital organs and it helps them conserve warmth. It also makes it easy to get up quickly, should an emergency occur.

This position restricts movement during sleep, so you won’t see much twitching. Some say that a yorkie that sleeps in this position feels uncomfortable, but that is not necessarily the case. Even if a dog feels perfectly safe, it will often sleep in this position because it feels cozy and warm.

The superman position is where your dog is sprawled out on its stomach, with its arms and legs stretched out straight, like superman when he flies. This sleeping position makes it easy to quickly pop back up onto their feet.

For that reason, dogs like to sleep in this position when they want a quick rest, but also want to be ready to jump back up and play some more, if the opportunity arises. High energy pups like this position, but dogs will also end up like this is they simply plop down for a break where they stand.

This common sleeping position is another one that is not unique to yorkies, or even to dogs. Plenty of pets like to snuggle up to their owners, to another human, or to another pet (not always necessarily from the same species) when they sleep.

When any animal does this, it means that it wants to get close to you and wants to bond with you. And if they do it wit another pet, it’s their way of saying they want to bond with their furry sibling.

Any dog sleeping this way feels very loving and affectionate toward you. It indicates that you pet is comfortable napping with you and is one of the big ways Yorkies show affection.

That’s why it is good to encourage this when you can (sometimes you simply have other things to do, I know). Show your pet you love it as much as it loves you by holding it close or petting it while it naps.

What Else To Know About Yorkies And Sleep

Yorkies are a breed that loves to take a nap. It can seem like they are always sleeping, whether on the sofa next to you, in bed under your blanket, in their own bed, anywhere on the floor, or just anywhere, period.

The only time they don’t seem to sleep is early in the morning, when they wake you up with a slobbering tongue to the face.

But do yorkies sleep a lot for real, or doe it just seem like they sleep most of the time?

They do sleep a lot. How much exactly depends on many factors, like their environment (noisy or quiet), your sleeping patterns (they do adapt to their owners to a large degree), their health (certain sicknesses cause them to sleep more, while others cause them to sleep less, and more. But age plays an especially large role.

Young yorkies sleep between 15 to 21 hours per day, on average. This includes the total sleep time for the day, meaning any and all naps are included.

When they are not sleeping, they burn their energy in bursts of intense activity. It’s pretty amazing. These little pups can go from insane energy to comatose in minutes.

As they age, they need less and less sleep. An adult yorkie gets an average of 12 to 17 hours per day.

Causes Of A Sudden Change In Sleeping Habits

Sometimes, your yorkie will suddenly sleep a lot less, or a lot more, than it usually does. Or it might stat favoring a different sleeping position from the one it usually favors.

And sudden change in sleeping position or sleeping time generally indicates that there is an issue. Most commonly, it indicates that your pet might be sick, which could be serious.

But it could also be due to something completely harmless. If you know it’s not serious, you can fix the issue and that should take care of it. But if it is due to a possible illness, or even if you can’t rule this out 100%, you should have a vet take a look at your pup, just to be safe.

Let’s take a look at the primary reasons for a sudden change in sleeping habits.

If your dog no longer feels comfortable in its bed, it will have difficulty sleeping. This could be due to sudden damage to the bed, or simply to deterioration over time.

Even the best Yorkie beds wear out after 4 to 5 years and need to be replaced. If yours is that old, get a new one. Otherwise, check the bed thoroughly to make sure it is still providing the level of comfort to which your yorkie is accustomed.

Sleep apnea tends to affect overweight dogs (and humans) and causes short periods during sleep when breathing stops altogether. Obviously, this will cause your pup to wake up, which affects the quality and amount of sleep it gets at night and can result in sleeping much more during the day.

In addition to sleeping more during the day, your dog may also snore loudly at night. This is a common sign of sleep apnea in yorkies, as well as humans. But you want to distinguish this snoring sound from the one you might hear when your yorkie snorts like a pig. This is not related to sleep apnea and not something to worry about (usually).

Despite what most people believe, older dogs sleep less that younger ones. This is due to age-related ailments making it harder to sleep and just a general reduction in the need for sleep.

If your pet is unable to sleep due to arthritis or a similar condition, consider getting it an orthopedic bed. Your vet can help recommend the kind of bed that would be best for your dog’s condition.

Yorkies are naturally hyper. They have a lot of energy that they release in bursts. Then they sleep more to generate more energy. IF your pup has to much energy at bedtime, the obvious solution it to make it exercise to burn off some of that energy.

But you can’t do this close to bedtime, or it will have the opposite effect. Your dog will be too worked up to sleep. Two hours before bedtime is when physical activity should cease, in order to give your yorkie sufficient time to wind down before bed.

Health issues are the most common cause of a drastic change in your yorkie’s sleeping habits. If you suspect a health problem is at fault, or even if you simply can’t rule it out, you should talk to your vet as soon as possible.

If you’ve owned a yorkie for any length of time, you’ve likely seen your share of strange sleeping positions. You’ve probably also noticed that your dogs favors one or two positions.

Hopefully this article has helped you understand why your yorkie might be favoring those particular sleeping positions and what it says about it and about its relationship with you. 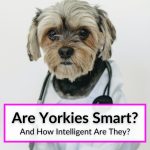 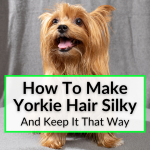 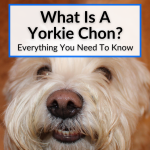