You are here: Home / Grooming

Yorkies are known for luxurious hair that can hang down over their eyes, even extend to their noses. But as cute as it seems, it should be trimmed for two reasons; the Yorkie will have a clearer vision and, thus, enjoy life more and the Yorkie’s risk of suffering from eye infections decreases since there’s no hair to irritate them.

Should I cut the hair around my Yorkie’s eyes? Yes, you should cut it! But you must have the basic skills first before undertaking the task.

Read on and know these basic skills. I will also discuss the need for extreme caution when trimming your Yorkie’s hair around his eyes.

Exercise Extreme Caution Around The Eyes

Keep in mind that Yorkies are prone to several eye issues aside from being sensitive around their eyes. For example, dry eyes can be caused by a wound in the eyes due to stray hairs. The symptoms include squinting, intense blinking, and inflammation, which may require medication.

Just imagine the possible health issues brought by a sharp object hitting your Yorkie’s eyes. You should be more careful about using scissors or shears near his eyes lest you poke them.

Your two-fold goal when cutting your Yorkie’s hair around his eyes are:

Steps In Cutting Your Yorkie’s Hair Around The Eyes

As with all things related to dog grooming, practice makes perfect! Don’t worry if you didn’t get it right the first time. Your Yorkie’s hair will grow back, and you can cut it again. 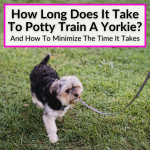 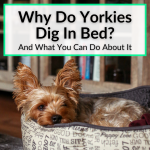 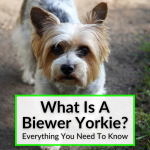 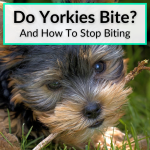 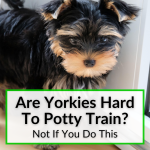 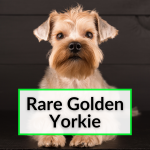